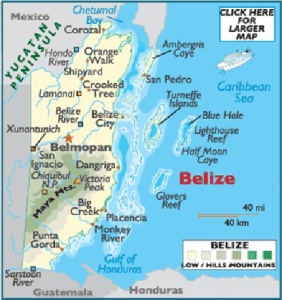 Belize is located in both the northern and western hemispheres.
Located in North America on the northern edge of the Central America isthmus – a somewhat narrow strip of land that connects North and South America – Belize is bordered by Guatemala, Mexico, the Gulf of Honduras, the Gulf of Chetumal and the Caribbean Sea.

Archaeological evidence in Belize indicates that the famed Mayan culture began to emerge in this lowland area of the Yucatan Peninsula around 1000 BC.

There are many theories (none proven) why the Mayan society began its general decline across the entire Yucatan in the 10th century, yet remnants of this extraordinary people and a quite sizeable population of direct descendants still exist in Belize and all across the Yucatan today, despite hundreds of years of European colonization of the area.

And speaking of Europeans, Spain aggressively controlled most of the colonies on the fringes of this New World, when the first English settlers arrived in the early 1600s. For the next two centuries military conflicts (mostly naval) between the British and Spanish raged, as both countries desired this land.

The last attack by the Spanish occurred in 1796, and in the early 1800s, after most of the Spanish colonies in the New World had gained independence, the Settlement of Belize was under British control.

Regional power struggles continued in the area over the next 50 years, and then in 1862, the Settlement of Belize was officially declared a British colony, and named British Honduras.

Similar to all European colonies in the Americas, British Honduras also craved independence, but Guatemala continued to claim the entire area, and the British were reluctant to release their firm grip.

By the 1960s the British began to soften their position, and though they still controlled all of the defense and foreign affairs of the settlement, its name was changed to Belize in anticipation of the independence, which finally did come in 1981.