Louisiana is located in the Gulf Coast region of the United States of America – a part of North America – Louisiana is bordered by the states of Arkansas, Mississippi and Texas and the Gulf of Mexico.

Louisiana is bordered on the N by Arkansas; on the E by Mississippi (with part of the line formed by the Mississippi River and part, in the extreme SE, by the Pearl River); on the S by the Gulf of Mexico; and on the W by Texas (with part of the line passing through the Sabine River and Toledo Bend Reservoir). The state’s geographic center is in Avoyelles Parish, 3 mi (5 km) SE of Marksville. The total boundary length of Louisiana is 1,486 mi (2,391 km). Louisiana’s total tidal shoreline is 7,721 mi (12,426 km). 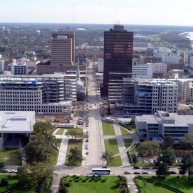