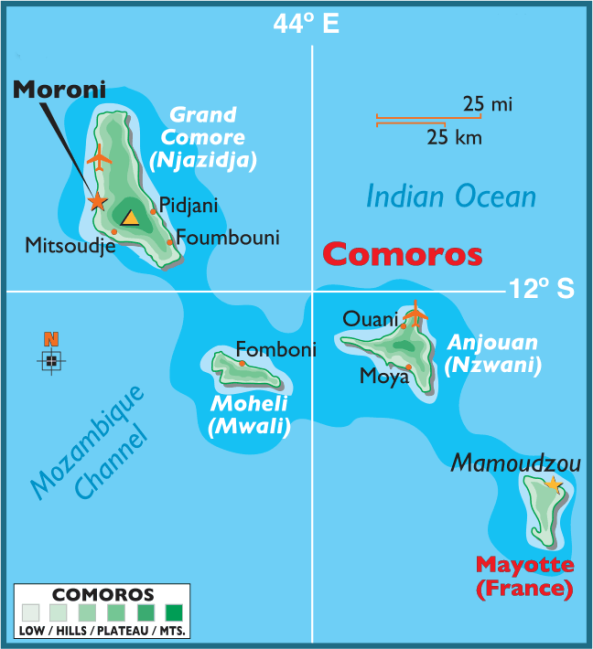 The archipelago of Comoros is situated in the tropical waters of the Indian Ocean between the eastern coast of Africa and Madagascar.

Arriving no later than the 6th century AD, the first inhabitants of the Comoros are thought to have been African, Southeast Asian and Oceania settlers, and thus were ultimately populated by a series of groups from Africa, the Persian Gulf, the Malay Archipelago, and Madagascar.

Development of the Comoros began during the 9th and 10th centuries, with trade routes emerging between the 11th and 15th centuries. Most frequently visited by Muslims, the Comoros became an important trading post for sailors seeking out coral, ylang-ylang, ivory, beads, spices, and gold.

In the late 1800’s, the islands were annexed by France, and governed by the French colonial governor general of Madagascar.

Independence for the Comoros was gradual, and was finally achieved in 1975.

Since then, numerous coups [20 in total] and inter-island disagreements have led to political unrest and instability.

In 1997, the islands of Anjouan and Moheli attempted to achieve independence from the Comoros to regain French rule, but were rejected by France; which led to harmful conflicts between troops and rebels.

When combined with a growing population, few natural resources and a limited food supply, the future of Comoros is uncertain.

The islands depend heavily on imports of basic necessities, often paid for by foreign aid. In addition, the health care system is inadequate, illiteracy is widespread, and its international debt is growing.

Through it all, spices are a profitable export, and tourism provides a significant local source of revenue. French, its financial benefactor, remains an active trading partner.