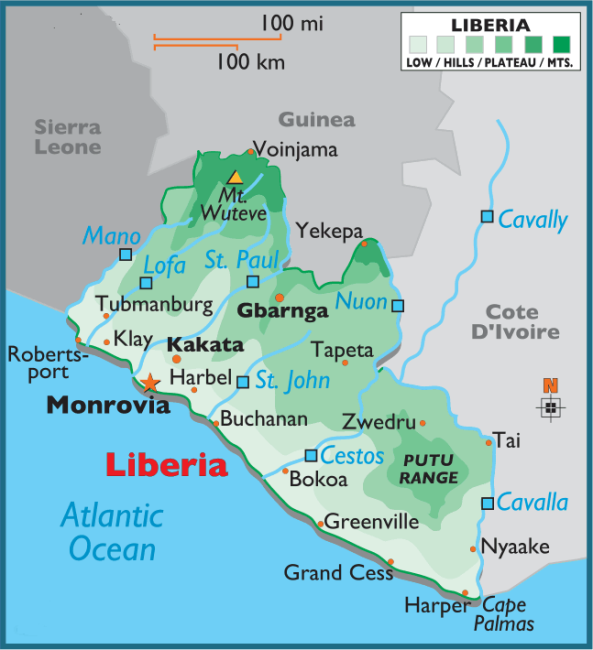 Madam Ellen Johnson Sirleaf is the 24th President of Liberia and Africa’s first democratically elected female Head of State; is serving her second term as President after winning the 2011 presidential election.

Liberia is one of the very few African countries not colonized by a European country, and subsequently established a unique relationship with the Unites States.

That concept was based on the premise that former American slaves would have greater freedom and equality in Africa. In that regard, slaves freed from other slave ships also were sent there instead of being repatriated to their countries of origin.

Prior to this colonization, the region was known as Costa de Pimenta (Pepper Coast), due to the amount of melegueta pepper, and was inhabited by Mende-speaking peoples as far back as the 12th century.

By 1847, the Americo-Liberians were able to establish a republic.

From 1944 to 1971, President Tubman put great effort into bridging the political, economic, and social gaps between descendents of original settlers and inhabitants of the interior, as well as in promoting of foreign investments.

In 1980, a military coup led by Samuel Doe ushered in a decade of authoritarian rule.

Subsequently, internal unrest overcame the country as repression grew, and by December 1989, Charles Taylor launched a rebellion against Doe’s regime that led to a prolonged civil war in which countless thousands were killed, including Doe himself.

A period of relative peace in 1997 allowed for elections that brought Taylor to power, but major fighting resumed in 2000. In August 2003, a peace agreement ended the war and prompted the resignation of Taylor, who was exiled to Nigeria. He is now on trial in The Hague.

Ellen Johnson Sirleaf was elected president in 2005, and reelected in 2011.

Liberia is still recovering from the lingering effects of civil war and related economic dislocation. The process of rebuilding the social and economic structure of this war-torn country is difficult, and statistics indicate that about 85% of the population live below US$1.25 a day.