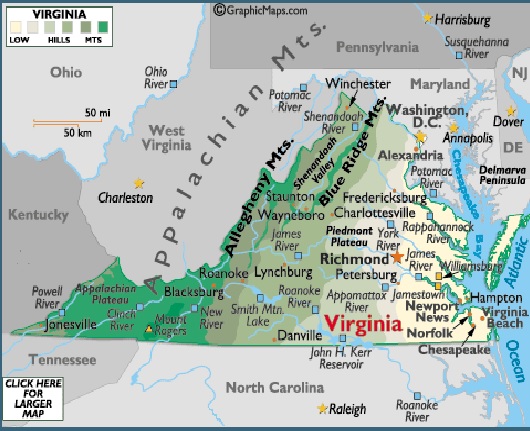 Virginia is located in the East Coast (South Atlantic) region of the United States. It’s bordered by the states of North Carolina, Tennessee, Kentucky, West Virginia and Maryland, and by Washington, D.C.; the Chesapeake Bay and Atlantic Ocean.

Geographical area and extent:
Situated on the eastern seaboard of the US, Virginia is the 4th largest of the South Atlantic states and ranks 36th in size among the 50 states.

Virginia is bordered on the NW by West Virginia; on the NE by Maryland and the District of Columbia (with the line passing through the Potomac River and Chesapeake Bay); on the E by the Atlantic Ocean; on the S by North Carolina and Tennessee; and on the W by Kentucky. The state’s geographic center is in Buckingham County, 5 mi (8 km) SW of the town of Buckingham.

Virginia’s offshore islands in the Atlantic include Chincoteague, Wallops, Cedar, Parramore, Hog, Cobb, and Smith. The boundaries of Virginia, including the Eastern Shore at the tip of the Delmarva Peninsula, total 1,356 mi (2,182 km), of which 112 mi (180 km) is general coastline; the tidal shoreline extends 3,315 mi (5,335 km).