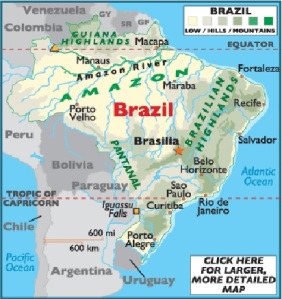 Map of Brazil
Brazil is dissected by both the Equator and Tropic of Capricorn, is positioned in the northern, southern and western hemispheres. Covering almost 50% of South America, Brazil is bordered by Argentina, Paraguay, Uruguay, Bolivia, Peru, Colombia, Venezuela, Guyana, Suriname, French Guiana and the Atlantic Ocean.

Rio de Janeiro is the capital city of Brazil
It is without question one of the most magnificent port cities on the planet. Sailing into its arms is an experience that no one would ever forget

Rio de Janeiro is world famous for many things, but the most significant ones certainly must include Copacabana and Panama beaches, an unrivaled Carnival celebration, infectious samba music, some of the best soccer teams to ever play the game, Christ the Redeemer statue high atop Corcovado mountain, enormous granite peaks in all directions, including Sugarloaf mountain, the #1 tourist attraction in the city.

Rio itself is home to some seven million people, known locally as cariocas. And like so many of the large cities of the world, Rio is a mixture of wealth and poverty. However, this mass of humanity blends very well together; their mood is casual, friendly and very welcoming.

In 2014 the city will host the FIFA (soccer) world cup, and in 2016, the Summer Olympics come to Rio. The world is traveling to Rio de Janeiro, and you should too!