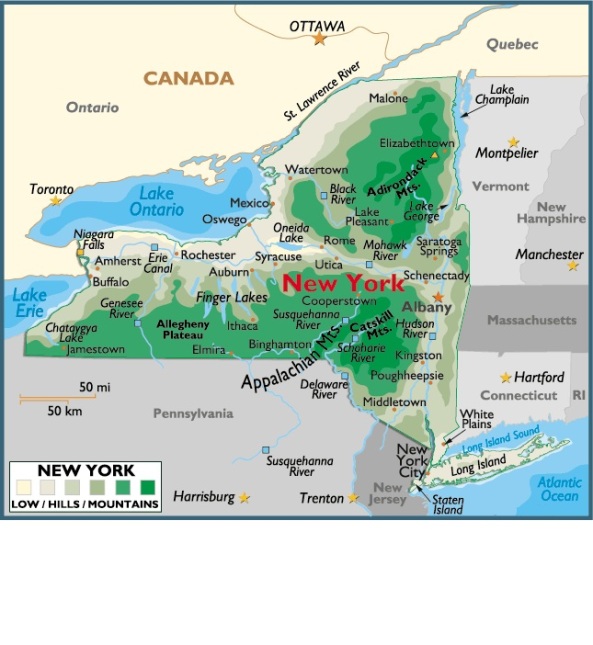 Mainland New York is bordered on the NW and N by the Canadian provinces of Ontario (with the boundary line passing through Lake Ontario and the St. Lawrence River) and Quebec; on the E by Vermont (with part of the line passing through Lake Champlain and the Poultney River), Massachusetts, and Connecticut; on the S by the Atlantic Ocean, New Jersey (part of the line passes through the Hudson River), and Pennsylvania (partly through the Delaware River); and on the W by Pennsylvania (with the line extending into Lake Erie) and Ontario (through Lake Erie and the Niagara River).

Two large islands lie off the state’s SE corner. Long Island is bounded by Connecticut (through Long Island Sound) to the N, Rhode Island (through the Atlantic Ocean) to the NE, the Atlantic to the S, and the East River and the Narrows to the W. Staten Island (a borough of New York City) is separated from New Jersey by Newark Bay in the N, Raritan Bay in the S, and Arthur Kill channel in the W, and from Long Island by the Narrows to the E. Including these two islands, the total boundary length of New York State is 1,430 mi (2,301 km). Long Island, with an area of 1,396 sq mi (3,616 sq km), is the largest island belonging to one of the 48 coterminous states.

The state’s geographic center is in Madison County, 12 mi (19 km) S of Oneida.