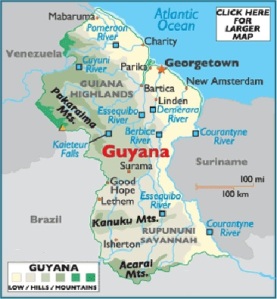 Map of Guyana
Guyana is positioned in the northern and western hemisphere. It’s located on the northern edge of South America, and bordered by Suriname, Brazil, Venezuela and the Atlantic Ocean.

Archeological evidence indicates that the wandering Amerindians migrated to South America from the Caribbean, inhabiting many of the continent’s coastal lands, including present-day Guyana.

The country was first discovered by European explorers at the very end of the 16th century, and it was the Dutch who subsequently began to build permanent settlements here in 1621. Shortly thereafter, African slaves arrived in this new colony.

Over the next few centuries, Guyana history was punctuated by battles fought and won, possessions lost and regained, as the Spanish, French, Dutch and British wrangled for centuries to own this land.

After the last major war between England and Holland in 1803, Guyana was given to England, and its largest settlement was renamed Georgetown.

Guyana remained a British colony until it finally gained its independence in 1966. It remains South America’s only English-speaking country.

Ruled into the early 1990s by socialist governments, today, with its state-controlled past left behind, it’s aggressively moving into a free market system and a brighter, independent future.

Covered with rivers and a massive rain forest, it’s a rugged, unspoiled country, with over 90% of the population living along the coastal areas.

Guyana is a land of great promise as it has many natural resources, including large tropical hardwood forests, plentiful fish and shrimping grounds, and a wide variety of mineral deposits, including gold, diamonds and semi-precious stones.