Libya is literally covered by the Sahara Desert. The only exception is the narrow 1200 mile coastline bordering the Mediterranean Sea, where almost 80% of its population resides.
Once part of the Roman province of New Africa, it was subsequently controlled by the Byzantine and Ottoman empires. In modern times it was occupied by the British and French, but since 1969, the country is led by the government of Colonel Muammar Qaddafi.

In total, there are six distinct historical periods of Libya: Ancient Libya, the Roman era, the Islamic era, Ottoman rule, Italian rule, and the Modern era.

Archaeological evidence suggests that Libya’s coastal plain was once inhabited by nomadic hunters and herders around the thirtieth millennium BC. This culture prospered until 2000 BC as the desert began expanding, thus forcing the population to migrate into the Sudan.

Eventually the Berbers arrived in North Africa, and settled much of the region from Egypt to the Niger Basin.

Tripoli, the ancient capital city, was designed by the Romans, and remains one of the most exotic destinations on the planet. They conquered the region around Tripoli (Tripolitania) in 106 BC, and unified all three of Libya’s provinces into the single Africa proconsularis.

Libya flourished under Roman ruling, and experienced a golden age during the 2nd century AD. Tripoli remained wealthy and prosperous for over 400 years, and grew to be a major exporter of olive oil.

Although the Abbasid dynasty managed to restore order and bring a measure of prosperity to the region, the economic and political stability of Libya began to slowly collapse.

The beginning of the 16th century marked a period of minimal central authority within Libya, and its waterways grew into a haven for pirates. The Ottomans arrived in the mid-1500s, and Libya was divided into three provinces: Algiers, Tripoli, and Tunis.

Ahmed Karamanli, an Ottoman cavalry officer, seized control of the area in 1711, and established the Karamanli dynasty that lasted for 124 years.

The Italians arrived in 1911, but only remained for about 30 years. It was in 1934 that the name “Libya” was officially adopted for the region.

On December 24, 1951 Libya declared their independence, after the UN General Assembly began to push the country in that direction two years prior, and the United Kingdom of Libya was established under the ruling of King Idris.

In 1959, oil reserves were discovered, and the income generated from petroleum sales pushed Libya into an extremely wealthy state. 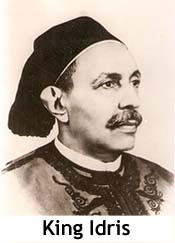 King Idris was exiled to Egypt in 1969, after Muammar Gadhafi staged a coup against the monarchy, and Libya was transformed into the new Libyan Arab Republic.

By 1977, Gadhafi had passed all power down to the General People’s Committees, claiming that he was only to be known as a symbolic figurehead and nothing more. Libya then officially became known as the Great Socialist People’s Libyan Arab Jamahiriya.

Although Gadhafi claimed to have released power, critics proclaimed that he in fact had given himself virtually unlimited power, and ultimately Gaddafi assumed the title of “King of Kings of Africa” in 2008.

In 2003 the United Nations finally voted to lift the 11-year-long sanctions because of Libya’s payment of indemnity to victims and relatives of terrorism. In 2004, the United States removed all remaining sanctions, and began to establish normal diplomatic relations.

Taking a lead from their neighbors to the west and east, as the rulers of both Tunisia and Egypt were overturned, the citizens of Libya sparked a full-scale revolt on February 17, 2011 against the Gadhafi regime.

A violent civil war followed, and ultimately resulted in the ousting and death of Muammar Gaddafi, as well as the collapse of his 34-year-old Jamahiriya state. As a result, Libya is currently undergoing political reconstruction, and is governed under an interim constitution drawn up by the National Transitional Council (NTC).

Libyans voted in a first ever parliamentary election, since Gadhafi’s dictatorship, on July 7, 2012. A few weeks later, the General National Congress was given the task of forming an interim government and drafting a new constitution.

The immediate future of this country remains uncertain as they begin to rebuild their internal structure; oil remains the driving force in Libya’s economy, and in fact, the country has the highest standard of living in Africa