The Greek historian Herodotus called Egypt, “The Gift of the Nile,” and along that life-giving river, the ancient Egyptians built their amazing civilization, one they ruled for three millennia.

The history of Egypt is typically divided up into the following periods: Prehistoric, Ancient, Greco-Roman, Medieval, and Modern.

Prehistoric Egypt spans the period of earliest human settlement – 3100 BC, or the beginning of the Early Dynastic Period.

Dominated by hunter-gatherers, semi-permanent dwellings were used during this period, and the development of tools reached Egypt during 40,000 BC. The Khormusan were amongst the first cultures to use advanced tools developed from stone, animal bones and hematite (mineral form of iron).

Desertification forced early Egyptians to settle around the Nile, and adopt a more permanent and sedentary lifestyle around 6,000 BC.

The foundation of Dynastic Egypt was laid between 3500 to 3200 BC, as city dwellers began mass-producing mud bricks to build their cities, instead of reeds.

During the Naqada III period (3200-3000 BC) the introduction of hieroglyphs and irrigation transpired, as well as the beginning of the Protodynastic period, in which Upper and Lower Egypt was unified.

Ancient Egypt begins with the early predynastic settlements of the Nile Valley, and continues on until the Roman conquest in 30 BC.

According to Egyptian historian Manetho, the first king of Egypt was Menes; however, there are archaeological findings that support the claim that it was Narmer.

In the age known as the Old Kingdom (2686-2134 BC) Egypt was ruled by the Third through Sixth Dynasties, and is commonly known as “the Age of the Pyramids.”

Perhaps the most famous of Egypt’s landmarks, these pyramids were constructed as tombs for Egyptian Pharaohs (who were regarded as gods) and their consorts. Of the 118 identified today, the pyramids found at Giza are amongst the more famous, and considered to be the largest structures ever built.

Resting amongst the Giza pyramids is the Great Sphinx – the largest monolith statue in the world, and the oldest known monumental sculpture – built during the reign of Pharaoh Khafra between 2558-2532 BC.

Following the peak of the Fourth Dynasty, new reforms were initiated by Userkhaf during the Fifth Dynasty that weakened the central government. Civil wars sparked after Userkhaf’s reign, and continued to escalate, subsequently causing a famine. A severe drought served the final blow between 2200-2150 BC, and the Old Kingdom collapsed.

The government stabilized during the age of the Middle Kingdom, and a renewed prosperity for the country emerged with stronger Nile floods.

With the New Kingdom, the pharaohs set their sights on expanding Egypt’s borders, and so the military became a central priority. Egypt’s most prominent pharaohs ruled during this period, including: Hatshepsut, Thutmose III, Akhenaten and his wife Nefertiti, Tutankhamun and Ramesses II.

In 341 BC, Egypt was conquered by the Persians, and then by Alexander the Great in 332 BC. There was little resistance from the Persians, and the Egyptians welcomed the Greeks with open arms. Under their ruling, the country became a seat of learning and culture; however, the Egyptian culture wasn’t completely replaced, as new temples were built Egyptian style, and leaders portrayed themselves as pharaohs.

Rome took a great interest in Egypt, as they relied heavily on Egyptian imports, and in 30 BC Egypt was incorporated into the Roman Empire following the defeat of Marc Antony and Queen Cleopatra VII.

Compared to their Greek predecessors, the Romans displayed a more hostile attitude towards the Egyptians. Christianity took root in Egypt around the mid-1st century, and as it spread through the country over the next couple hundred years temples were closed and pagan rites banned. Anti-pagan riots sparked during the 3rd century AD, and many public and private religious imagery were destroyed Consequently, the Egyptian culture began to decline, and while the native population continued to speak their language, hieroglyphic writing slowly fell by the wayside.

In 639 AD an army of 4,000 Arabs crossed into Egypt from Palestine, and rapidly took control of the region, ending the 975 year Greco-Roman reign.

Upon their settlement, the Arabs introduced Islam and Arabic, and subsequently dominated Egypt for many centuries. The Ottoman Turks gained control of Egypt in 1517, and aside from a brief French incursion (1798-1806), the Ottomans remained until the mid-19th century.

The Ottoman invasion caused a decline within Egypt’s economic system, and, coupled with the effects of plague, exposed the country to foreign attackers.

Following the completion of the Suez Canal in 1869, Egypt developed into a vital transportation hub, but fell heavily into debt. To protect its investments, Britain seized control in 1882. 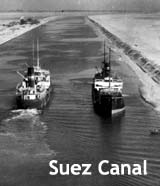 Egypt became a British protectorate in 1914, then achieved partial independence in 1922, and full sovereignty in 1945.

The Egyptian Republic was officially declared on June 18, 1953, and General Muhammad Naguib was appointed the first president. Gamal Abdel Nasser, the leader of the 1952 Egyptian Revolution, forced the resignation of Naguib in 1954, and assumed power in 1956.

In 1967, Israel invaded the Sinai Peninsula as well as the Gaza Strip, which had been occupied by Egypt since 1948, and the Six Day War ensued. At wars end, Egypt lost both territories to Israel, and in 1973 launched a surprise attack (the October War) in an attempt to regain control.

A ceasefire was issued by the United Nations on October 24, 1973, and most fighting on the Egyptian front ended a couple of days later. As time moves forward, a rapidly growing population, limited arable land, and on-going dependence on the Nile River, all continue to overtax resources for the country.

The Egyptian government still struggles through economic reforms in the 21st century, and the pressing need for massive investment in communications and infrastructure.

The Egyptian Movement for Change (Kefaya) was launched in 2003 as an opposition towards the Mubarak regime, and an effort to create democratic reforms and greater civil liberties.

A revolution and widespread protests sparked on January 25, 2011, this time with an objective to remove Mubrak from power. Continuous mass demonstrations and civil resistance began to weaken Mubarak’s government, and on February 11, 2011, Mubarak resigned and fled the country.

Egypt held a parliamentary election on November 28, 2011, its first since the previous regime had been in power. Initially, the turnout was high, and no violence was reported; however, tensions began to mount as the election moved through several phases to determine the winner.

The Supreme Court of Egypt ruled the election unconstitutional on June 14, 2012, fueling protesters who gathered outside the court building.

On June 30, 2012, Mohammed Mursi was sworn in as Egypt’s new president. Initially declining to speak publicly on the issue of a re-institution of the parliament, Mursi indicated that he would begin to actively search for ways to restore the parliament, as well as releasing all non-criminal political detainees.

A new 35 member cabinet, including 28 newcomers, was announced on August 2, 2012 by Prime Minister Hisham Qandil. Three days later an Egyptian military base in the Sinai Peninsula was ambushed by armed soldiers, with no known group laying claim to the attack in its aftermath.

In response to the Egyptian-Israeli border attack, aerial strikes on militants were launched by Egyptian forces against masked gunmen at military checkpoints – which in part was a broader operation against Islamist militant organizations.

In late September, 2012, the lower house of Egypt’s parliament was dissolved, and by early October President Morsi kept with his promise of releasing prisoners who, “Committed [deeds] with the aim of supporting the revolution and bringing about its objectives.”

As the days progress, Egypt continues to struggle through the revolution, and to this day its future is uncertain.

Regardless, Egypt remains one of the favorite destinations of archaeologists, historians and tourists from around the world.