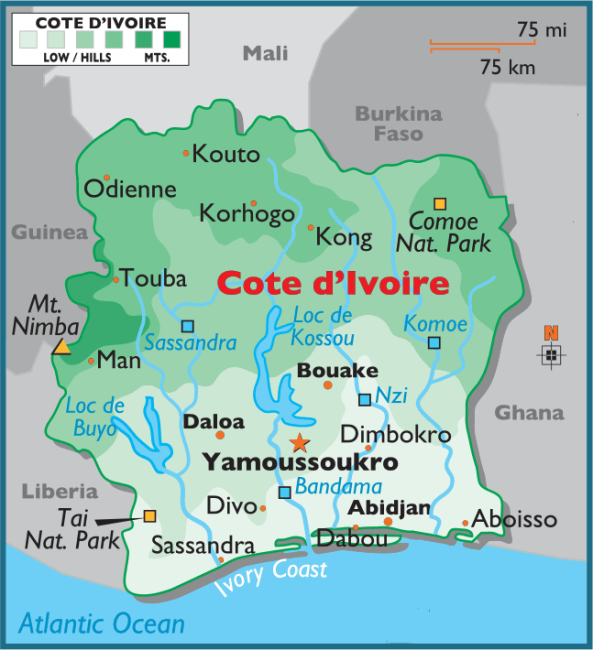 Before the Europeans colonized the region, the Ivory Coast was controlled by various states, including the Gyaaman, Kong Empire and Baoule.

The Kong Empire was known for being an affluent center of agriculture and trade, but ethnic diversity ultimately destroyed the kingdom.

In the 15th century, the Portuguese were the first Europeans to explore the Ivory Coast of Africa, and various other European sea powers followed shortly after, setting up a trade route for gold, ivory, pepper, and slaves. 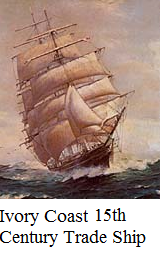 During the 17th and 18th centuries the French established settlements along the coast and began a long relationship that would change the culture, and for that matter, the economic future (and name) of this African nation.

The French colonial policy integrated French language, institutions, laws and customs into the Ivory Coast, and even after declaring independence in 1960, Cote d’Ivoire retained close economic (export/import) ties with France, becoming one of the most prosperous African countries.

Over the centuries it suffered through very little political turmoil, but recently, a few poorly-timed military coups and subsequent internal conflicts increased its national debt, and dramatically curtailed its once profitable tourism industry.

Although much of the fighting ended in 2004, civil unrest for the Ivory Coast lasted until a peace agreement was reached in 2007.

Organized elections that were originally planned for 2005 were postponed until 2010, five years after Gbagbo’s term was to have ended, and this ultimately led to a second civil war.

Months of unsuccessful negotiations pushed the crisis into a critical state, as human rights violations were brought against both sides; in addition, the election results had both Gbagbo and his opponent Alassane Ouattara claiming victory.

On April 11, 2011, Gbagbo was arrested by military forces, and Ouattara assumed office. 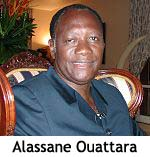 Cote d’Ivoire’s modern difficulties are sadly endemic on much of the African continent, as it, like many other countries, suffers from internal unrest, financial instability, low literacy levels and serious health care problems.

Alassane Dramane Ouattara was born 1 January 1942. He is an Ivoirian politician who has been President of Côte d’Ivoire since 2011. An economist by profession, Ouattara worked for the International Monetary Fund (IMF) – where he rose to be deputy head and the Central Bank of West African States (French: Banque Centrale des États de l’Afrique de l’Ouest, BCEAO), and he was the Prime Minister of Côte d’Ivoire from November 1990 to December 1993, appointed to that post by President Félix Houphouët-Boigny. Ouattara became the President of the Rally of the Republicans (RDR), an Ivorian political party, in 1999.